If you are looking for basic information and ideas on how to use Arduino boards on your model railroad layout, you’ve come to the right place.

I happen to model in N scale, but everything I write about in this blog can work in any scale from G to Z. Everything I’m doing is independent of the locomotive control system, so most techniques and technologies work equally well on DC or DCC layouts. This is for all modelers in all scales using any control system.

The Arduino Project is one of the best known, and by far best developed open source microcontroller board systems on the planet. In their words:

Arduino is a tool for making computers that can sense and control more of the physical world than your desktop computer. It’s an open-source physical computing platform based on a simple microcontroller board, and a development environment for writing software for the board.

Microcontrollers are integrated circuit chips that have the basic logic and input/output capabilities that constitute a simple computer. Microcontroller boards place that chip with a few essential external components on a board with power and ways to plug things in. Your program (called a “sketch” in the Arduino world) gets loaded into the chip’s permanent memory and runs efficiently with little overhead between your code and the device. 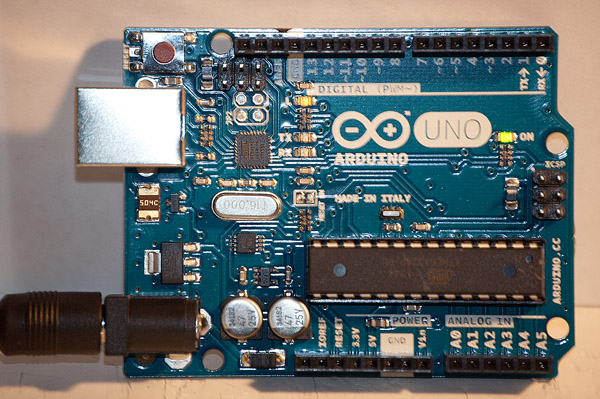 Arduino boards come in several designs that are broadly useful for model railroading. I recommend that model railroaders stick to the 5 volt boards for general purpose layout applications because the vast majority of sensor and actuator technologies use 5 volt logic. This will keep your life easy, and these are usually the least expensive boards in the family.

That said, 3.3 volt boards can be used where low power matters and you are not attaching to 5 volt peripherals; lighting applications come to mind. I haven’t gotten my hands on one yet, but I think its worth looking at the new MKR1000, a new 3.3 volt board that includes WiFi. With WiFi solving your communication problem, this is a very attractive board for lighting and other 3.3 volt applications in far parts of the layout.

The 5 volt boards most broadly useful for model railroading are: 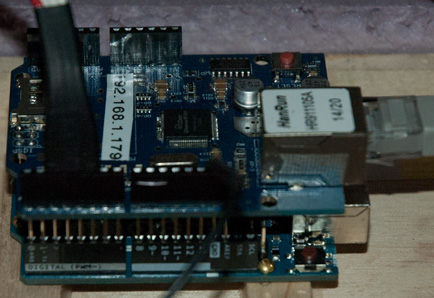 Uno R3 with an Ethernet Shield

Shields are peripheral boards that can be plugged into the pins (pins are the connections, or I/O points, for attaching things to the board) of a microcontroller board. Multiple shields can be stacked on top of each other to add interfaces and other capabilities to the microcontroller. A wide variety of peripheral boards in shield format are available from a robust and competitive international market. “Development” shields are available that are like prototyping PC boards, allowing you to create a custom shield.

What can I do with Arduino Boards?

These little boards are computers that can do anything from reading a wide variety of sensors to running devices like servos and communicating with each other using a variety of technologies and protocols.  Here are some common applications for model railroading:

One of my goals is to make my layout semi-autonomous, making it a dynamic environment within which I can operate trains. I can accomplish this with multiple boards running a selection of the applications listed above, communicating and working together in a cohesive system.

Is it Hard to Program an Arduino?

The IDE available on the Arduino website (Integrated Development Envronment — the software you use to write, compile and upload sketches to your boards) supports C++, an object-oriented super-set of the C language that has been the mainstay of professional development for 5 decades. You don’t have to write in an object oriented (OOP) style if you don’t want to — procedural C is fine. If you’ve ever programmed in C, C++, PHP, JavaScript or any similar structured language, you are good to go.

Arduino was designed as a teaching/learning tool so it is ideal for learning the basics if you’ve never programmed before.  Get an UNO starter set that includes parts and instructions for some basic projects—that will help you get started with both circuits and code. The Arduino website is an excellent resource for beginners, with plenty of information, tutorials and user forums for support.

Where can I buy Arduino boards?

Sparkfun and Adafruit are official distributors of Arduino products in the US, including some unique versions they have created.  You can find official goods at their websites, Amazon.com, Digikey, Jameco, Mouser and elsewhere.

On Amazon and EBay, you’ll find counterfeit copies, usually at ridiculously cheap prices. This is a touchy subject because the vendors of counterfeits are not doing anything original or making any contribution to the development costs. Arduino is an open-source platform, and they encourage experimentation and extension to the point that they provide the board design files so that you can modify them and manufacture your own if you wish. They like genuinely original variations on their designs. What they are less keen about is the counterfeits that are cheaply manufactured copies of the Arduino designs; these are often marked deceptively about the country of manufacture.

Official boards and the quality variants are well made. Solder joints are perfect and the parts excellent quality. I’ve yet to see an official product fail unless it has been abused (which happens to the best of us).

Having worked with a few knock-offs, I can say there is a quality difference.  I’ve had a couple of unofficial Nano’s spontaneously burn out on me. The solder joints are often atrocious. I’ve had heat dissipation issues with knock-off Ethernet shields. Most of the time the boards will work fine, but the trade-off for the low price is quality and occasional failure. The general rule in life—you get what you pay for—applies.

Get a starter kit with an UNO and materials for basic projects.  Here are a few examples:

Once you are generally familiar with the Arduino platform and comfortable building circuits for use with the boards, explore this blog and other sites for basic ideas and techniques.

Most people want to start by controlling some turnouts from a control panel. Here are a few posts that you may find helpful:

From there you can move on to signals and lighting, and perhaps even some mechanical objects. You can quickly find where I’ve written about these and other subjects by using the tag cloud you’ll find in the left column of every page.